Building a Republic is Not for Sissies

© Karl Albrecht. Adapted from Blueprint For a New America, p. 2

From its very founding, the architects of a successful republic have to get certain things right in order for the new enterprise to survive and thrive. Some things have to come first. In their approximate order of urgency, let’s consider solutions to the following challenges. Figure 1-1 illustrates these 10 basic components, or sub-systems, of a thriving republic.

System 1: Governance. What mechanism for control do we need? Who governs, how, and with what kind of authority? What kind of an organization or top-level system shall we create to solve the big problems, make the big decisions, manage resources, and make things work? Which aspects of the republic’s life should government control and which ones should it leave to the citizens?

System 2: Defense. Usually the leaders must immediately tend to the armed defense of the newborn republic, to avoid attack by rival states with opportunistic intentions. The republic needs some kind of defense force, even if it only consists of citizen soldiers with their own weapons.

System 3: Law and Order. Once they’ve ensured the survival of the new republic against external threats of invasion, the builders must quickly establish the basic elements of a civil society. This requires a set of rules for behavior, a system for enforcing them, punishments for violating the behavior code, and guidelines that determine how individuals must treat one another.

System 4: Revenue. Once the leaders have established an initial state of safety, security, and social stability, they need money to run the republic. This almost invariably requires some form of taxation imposed on the citizens, except perhaps in cases such as ancient Rome, in which foreign wars and ransoms for prisoners funded the republic, or in a few rare cases where the nation-state has control over valuable natural resources it can trade with others. But usually, taxes come next.

System 5: Commerce. Following closely on the heels of Law and Order and Revenue must come some kind of a system of laws governing the way people make use of natural resources and exchange their labor and goods in some kind of collective marketplace.

System 6: Public Services. In any successful republic the citizens expect their governing body to provide a range of services paid for out of the taxes they contribute. In addition to military security and law and order, they often expect things like infrastructure development, support for commerce, public welfare, and education.

System 7: Civil Liberties. In a democratic republic, “governments are instituted amongst [men], deriving their just powers from the consent of the governed,” as the American Declaration of Independence prescribes. Following on from that philosophy, governments must not have the power to deprive citizens of life, liberty, or property without “due process of law.” This critical principle requires the existence of an explicit set of laws and standards that specify the rights of individuals and the limited conditions under which governments might have the authority to over-ride them.

System 8: Immigration. Most nation-states have accepted incoming foreigners as visitors, traders, and also as prospective residents. In modern times all major governments have had to evolve rules, policies, practices, and methods for controlling the inflow of outsiders and for assimilating them into the native population.

System 9: Foreign Relations. The founders and leaders of every republic must sooner or later figure out how to get along with the other nation-states in its environment. They need basic policies, practices, and mechanisms for promoting peace, trade, mutual defense, and cooperation. Once the newborn republic comes to life, along come treaties and trade agreements.

System 10: Environment. To head off violent conflicts over land, water, and other natural resources, the founders must establish a system of rights for the use of natural resources. From there they must proceed to develop various shared resources that enable the society to thrive and grow, such as cities and towns, roads, bridges, waterways, forests, and farmlands. This requires a long-term vision for the protection of the natural environment, also known as “the Commons.” 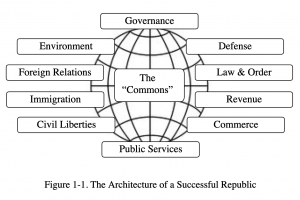 The Founders Got It (Mostly) Right

The Republic we inherited from the Founders provides for all ten of the key components we’ve just explored and some more besides. I’ve often mused that, either they had the benefit of some kind of divine guidance, or they must have had some awesome mental capacities. They managed to create a system and a process that has withstood the challenges and stresses of two centuries of turmoil, as well as the misguided ambitions of more than a handful of bumbling leaders—in the White House, in the Congress, and even the Supreme Court.