One Looks Forward, One Looks Backward, and Half is Figuring Things Out

Warning: the following discourse is politically incorrect to the n-th degree, and may be offensive to quite a few Americans. Stop reading now if you feel you might be one of those most offended. The opinions offered are those of the author, and do not necessarily reflect  the views of this community.

The chart below displays differences in Covid-19 vaccination rates across the various states in the US at the time of this writing. The chart will become outdated with time, but the story it tells will not.

The patterns on the chart signal much more about the American society than most of us realize, and more than many of us want to acknowledge. There’s a back-story hiding behind the seemingly simple story it offers. 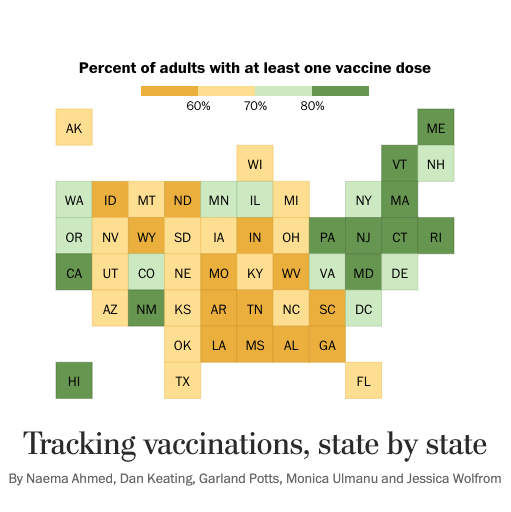 This “orange-green” polarity tells us more about US political dynamics, at both local and national levels, than any other comparison, including the outworn “red-blue” dichotomy associated with the two dominant political parties. Maybe we should adopt it as our preferred way of understanding social and political polarization and possibly working to reduce it.

To make a broad distinction: I see two “Americas” here.
One looks forward. The other looks backward. One embraces newness, ambiguity, and complexity. The other avoids it.
The Covid-19 vaccination rate, which happens to dominate news coverage at the time of this writing—serves as a peculiar kind of “proxy” variable for most of the socio-political differences and tensions between these two hypothetical Americas. Consider a few other comparisons:

Why Have the Orange States Not Progressed?

One cannot reasonably claim that the cultures of the orange states have made no progress at all in their social, political, and economic thinking. And tossing them all together into one ideological pot is not completely fair. Further, the green states can hardly be said to serve as perfect examples of social, political, and economic evolution.
Still, we can hardly ignore the evidence before us: collectively, the people of the orange states and their leaders have not fully embraced the kind of modernistic, pluralistic, inclusive, and progressive norms that the green states have mostly come to. With some exceptions, they remain largely insulated from the ideology of progressivism, and relatively closed to the world outside their borders.
I accept the inevitable skepticism this speculation will encounter, but I believe we can usefully summarize the differences between “green” politics and “orange” politics as the difference between progressive thinking and regressive thinking. To invoke a sports metaphor, progressive political thinking is driven to get to the next base; while regressive thinking tends to cling to first base because of its perceived safety and familiarity.
The answer to the presenting question traces, at least in part, to July 2, 1964, when US President Lyndon B. Johnson signed the Civil Rights Act (first proposed by his predecessor John F. Kennedy) into law. That Act and others to follow formally ended segregation in public places and banned discrimination in employment on the basis of “race, color, religion, sex, or national origin.”
Johnson reportedly commented to his associates as he signed the bill, “We’ve probably handed the South to the Republicans for a generation, at least.” What did he mean by that statement?
As a southerner—a Texan—”LBJ” understood the lingering resentment and sense of separateness that many of the people in the “Old South,” i.e. the former Confederate states, have long felt toward the “outside world,” or more generically the “North.” Johnson’s party, the Democrats, had always catered to the southern population by representing themselves as the party of the “little guy.” In code language, that meant the party of white, blue collar, and lower middle class people (many of whom were union workers in those days) who felt left out of the mythic American success story. By downplaying the issues of racial inequity and pitching to the hopes and fears of this core population, the Democrats could count on the “Southern vote” for decades.
Then, along came Dr. Martin Luther King, a charismatic leader of the black civil liberties movement, and a host of other activists who took up the cause. King and his followers, as well as other scholars and political leaders, galvanized millions of Americans and crystallized the issues for them as never before. Feeling the increasing pressure of public opinion,  Johnson reluctantly gave his support to the movement and signed the law.
Johnson knew that a vast swath of southern voters would see this as an unforgivable act of betrayal. Within a few years, most of the American South had indeed “gone Republican.” Johnson chose not to run for re-election in 1968 and his puppet candidate Hubert Humphrey got solidly trounced by Richard M. Nixon.
Nixon, a wily  politician and a crafty political fighter, immediately saw the opportunity to capture the flag. Starting with the nominating convention for the Presidential race, he began to signal to white southern voters that they’d get a better deal from the Republican party. Thus began a decades-long process of political seduction. Republican politicians at both state and national levels began to tailor their messaging more and more to this core population, and to move further and further away from the upper-middle class narrative of “the party of Eisenhower.” They preached a more cynical version of the race politics the Democrats had left behind.
The Republicans’ shift toward “identity politics,” i.e. setting social, political, and ethnic factions against one another, gave them a nearly iron grip on southern politics, but at the cost of lost confidence amongst northern, suburban, upper-middle class, and female voters, as well as black voters and other people of color. It turned out to be a questionable trade-off, because the rest of the voting population (Democrats and independents) outnumbered the cherished “orange state” core.
As of this writing, 32 years have passed since the last Republican, George H.W. Bush, won the presidency with a majority of the popular vote. Republicans got control of the White House on two occasions (George Bush, Jr. in 2000 and Donald Trump in 2016) due to the quirky rules of the Electoral College system. By any fair measure, however, the Republicans seem to have paid a high price for the orange states.

But There’s Another “Half”

Let’s return to the orange and green chart above and look at the colors—and states—that fall in between: the “light orange” states and the “light green” states. Light orange states now outnumber orange states, 17 to 13, but green states slightly outnumber light green states by 11 to 10 (if we count Washington, DC as a “state”).
Further, note that no orange state directly borders a green state. In all cases, they are separated by light orange and light green states. Does this suggest that the “buffer” states—those with the lighter shades—are psychographically “in between” the ideological ends of the spectrum? Might the light orange states be in transition, with their cultures evolving toward green (or, at least, light-green) values?
The state of  Virginia, for instance, once a quintessentially “Deep South” state (indeed, the headquarters of the old Confederacy), now has a Democrat governor and a Democrat-controlled legislature. Its legislature recently ratified the long-dormant Equal Rights Amendment. Its vax rate puts it in the light green (70-80 percent) zone.
To be sure, America remains a deeply divided political system. At the state level, there are 38 trifectas (same-party control of the governorship plus both legislative houses), with Democrats controlling 15 states and Republicans controlling 23. Only 12 states have shared governance between the two parties.

Is America Growing Up?

The national conversation in the US has been steadily, if slowly, evolving toward a more global consciousness. A worldwide virus pandemic; a frightening increase in environmental disasters; and economic upheaval caused by competitive threats from China, Russia, and other antagonistic regimes have brought the world to our collective doorstep. Like it or not, people in the orange states are getting a new dose of reality.
Our capacity, as a nation, to cope with these global challenges will depend more and more upon an enlightened, informed, and progressive population, in all states.
This view of our history offers clear and compelling advice for thought leaders and political advocates hoping to modernize the cultures of the orange, light orange, and light green states. Three macro-variables are closely associated with social, political, and economic modernism:
As a new generation of political leaders and candidates moves into the arena, maybe we can hope that they’ll promote and facilitate a more enlightened form of politics, at both state and national levels.
Views: 128